A command-line grammar of graphics

Sometimes I'm at my command prompt and I want to draw a graph.

Problem: I don't know gnuplot. Also, there's a couple things about it that bug me, and make me not enthusiastic about learning it.

One is that it seems not really designed for that purpose. It implements a whole language, and the way to use it for one-off commands is just to write a short script and put it in quotes.

The other is its whole paradigm. At some point in the distant past I discovered ggplot2, and since then I've been basically convinced that the "grammar of graphics" paradigm is the One True Way to do graphs, and everything else seems substandard. No offense, gnuplot, it's just… you're trying to be a graphing library, and I want you to be a graphing library that also adheres to my abstract philosophical notions of what a graphing library should be.

So, rather than adapt myself to the world, I've tried to adapt the world to myself.

There's a python implementation of the paradigm, called plotnine.1 (It has its own gallery.) And now I've written a command-line interface to plotnine.

It's not as powerful as it plausibly could be. But it's pretty powerful2, and if I stop developing now I might find it fully satisfies my needs in future. For example, I took a dataset of covid cases-per-capita timeseries for multiple countries. Then both of these graphs came from the same input file, only manipulated by grep to restrict to twelve countries: 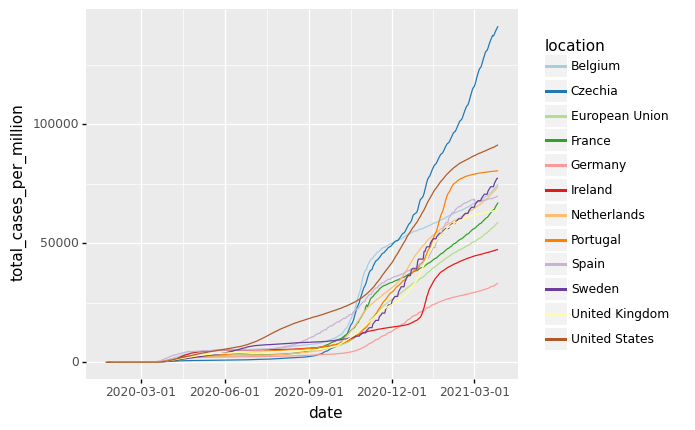 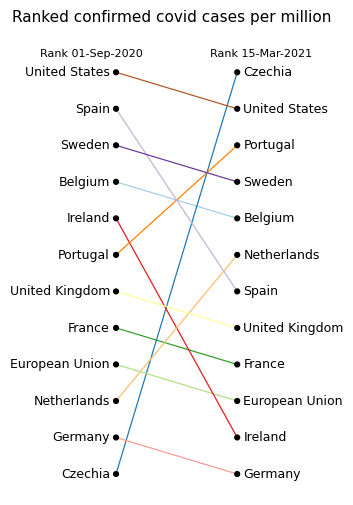 (The second one isn't a type of graph that needs to be implemented specifically. It's just a combination of the components "draw points", "draw line segments" and "draw text".)

Now admittedly, I had to use a pretty awful hack to get that second one to work, and it wouldn't shock me if that hack stops working in future. On the other hand, I deliberately tried to see what I could do without manipulating the data itself. If I wasn't doing that, I would have used a tool that I love named q, which lets you run sql commands on csv files, and then there'd be no need for the awful hack.

Anyway. If you're interested, you can check it out on github. There's documentation there, and examples, including the awful hack I had to use in the above graph. To set expectations: I don't anticipate doing more work on this unprompted, in the near future. But if people are interested enough to engage, requesting features or contributing patches or whatever, I do anticipate engaging back. I don't want to take on significant responsibility, and if this ever became a large active project I'd probably want to hand it over to someone else, but I don't really see that happening.